Grading papers and pre-holiday travel made the last two weeks hectic, but I still got some painting done. I also decided I didn't look the sparse look of my 6mm troops spread out on the 2" x 2" bases, so I re-based (glad I didn't flock) on 1.5" x 1" bases, in double line for infantry, single line for cavalry, and I like them much better this way.

So now my French Army set for One-Hour Wargames is done:

With the units on smaller bases, I'll probably make the battlefield smaller than I originally intended (probably 15" x 15" or so) and switch the range and movement measurements to cm rather than the inches as in the R.A.W. After seeing the successful play through at Shaun's Wargaming with Miniatures blog on a 12" x 12" battlefield, I'm not worried about playing on a smaller area. It obviously works just fine, and a game space approximating the dimensions of a moderately sized chess board will fit nicely on the desk in my study.

I also picked up some Baccus 6mm Napoleonic British (even though I've already got the Austrians in the queue for the work bench), as well as some 6mm buildings in the "Simply 6" range sold by Scale Creep Miniatures. 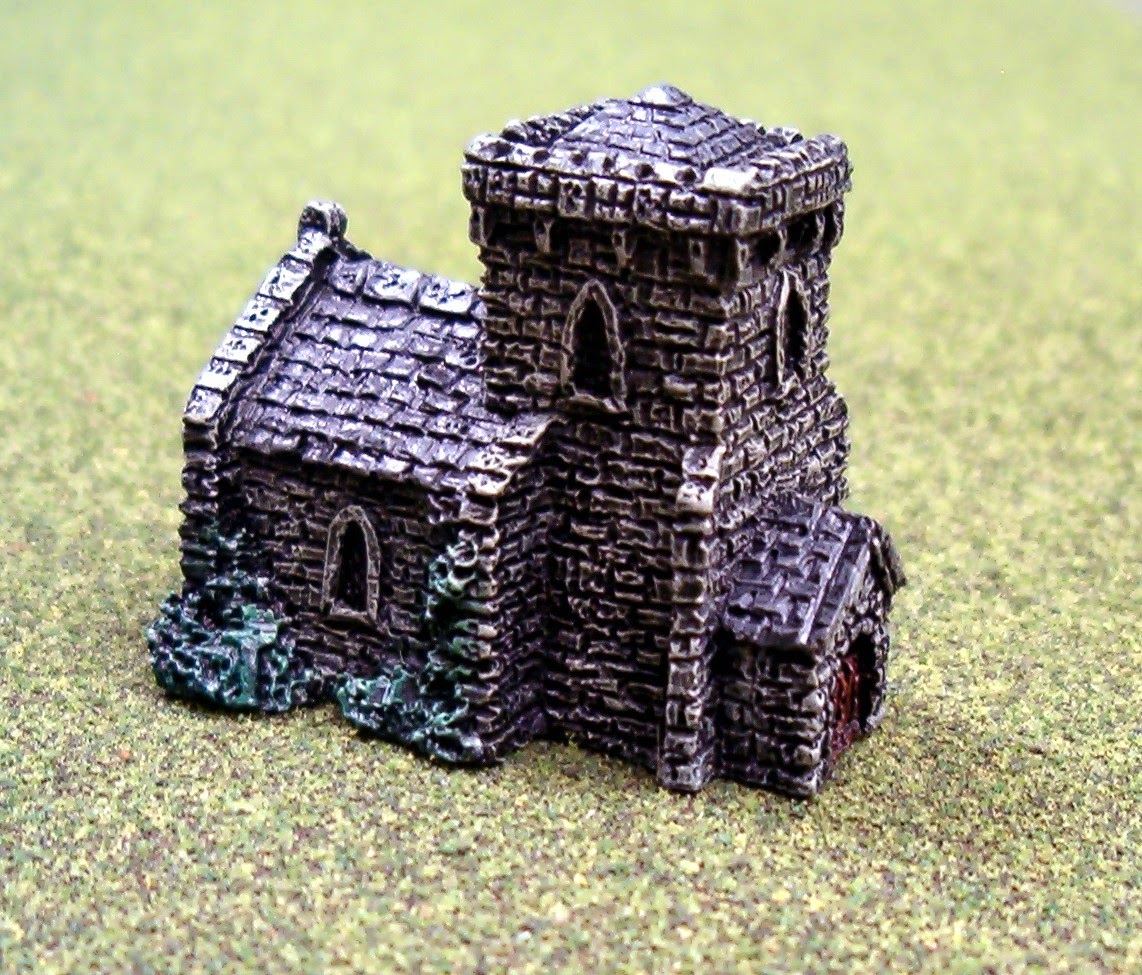 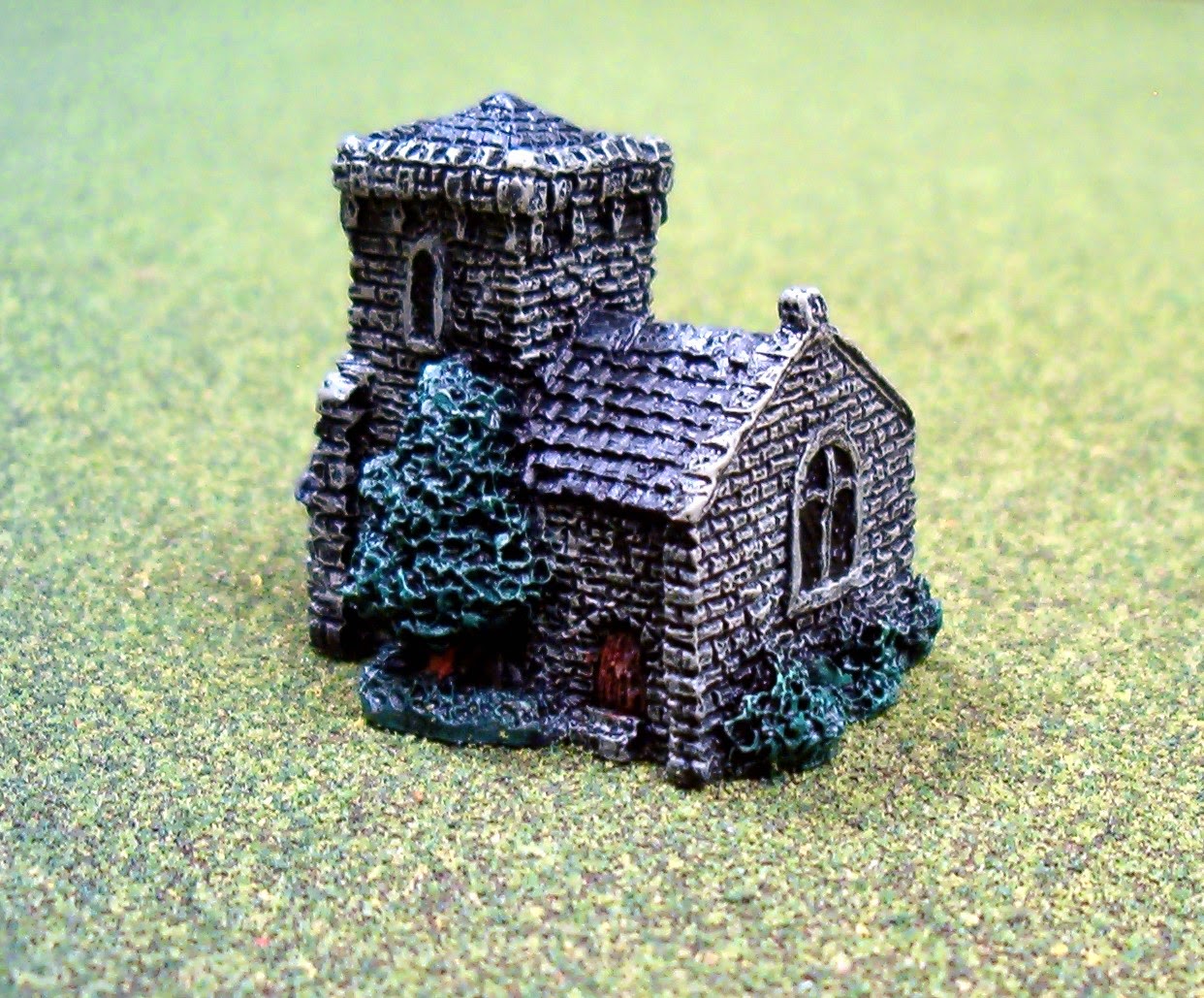 I've got a few more buildings to work on, which should be enough for two small villages or one medium-sized town.
Posted by Chris C. at 7:48 PM 8 comments:

It's not the Grande Armée yet, but it's growing.

Despite being swamped with end-of-semester grading and pre-holiday prep, I managed to complete a unit of cuirassiers and added flags to the previously painted infantry.

Normal view from about 18 inches away: 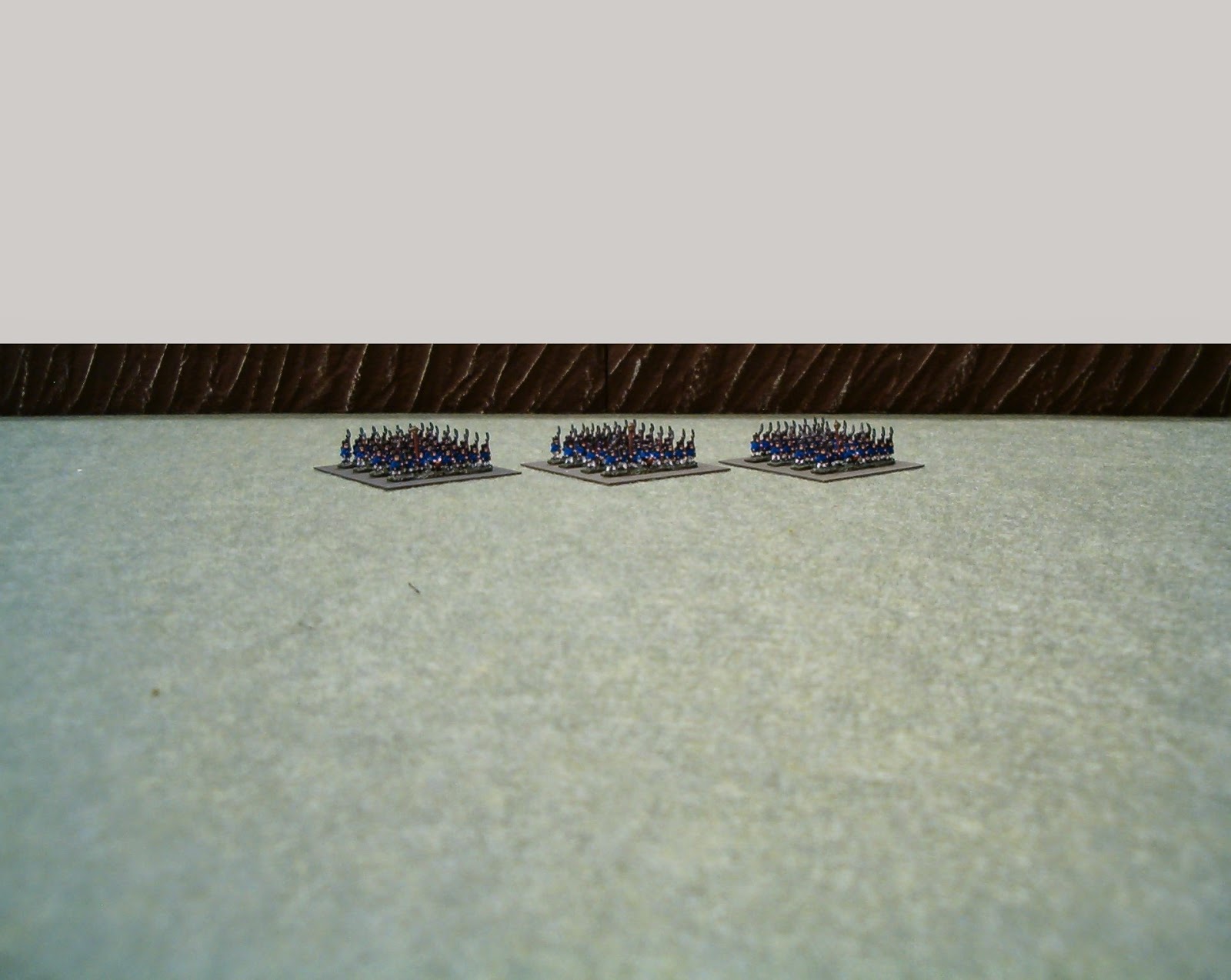 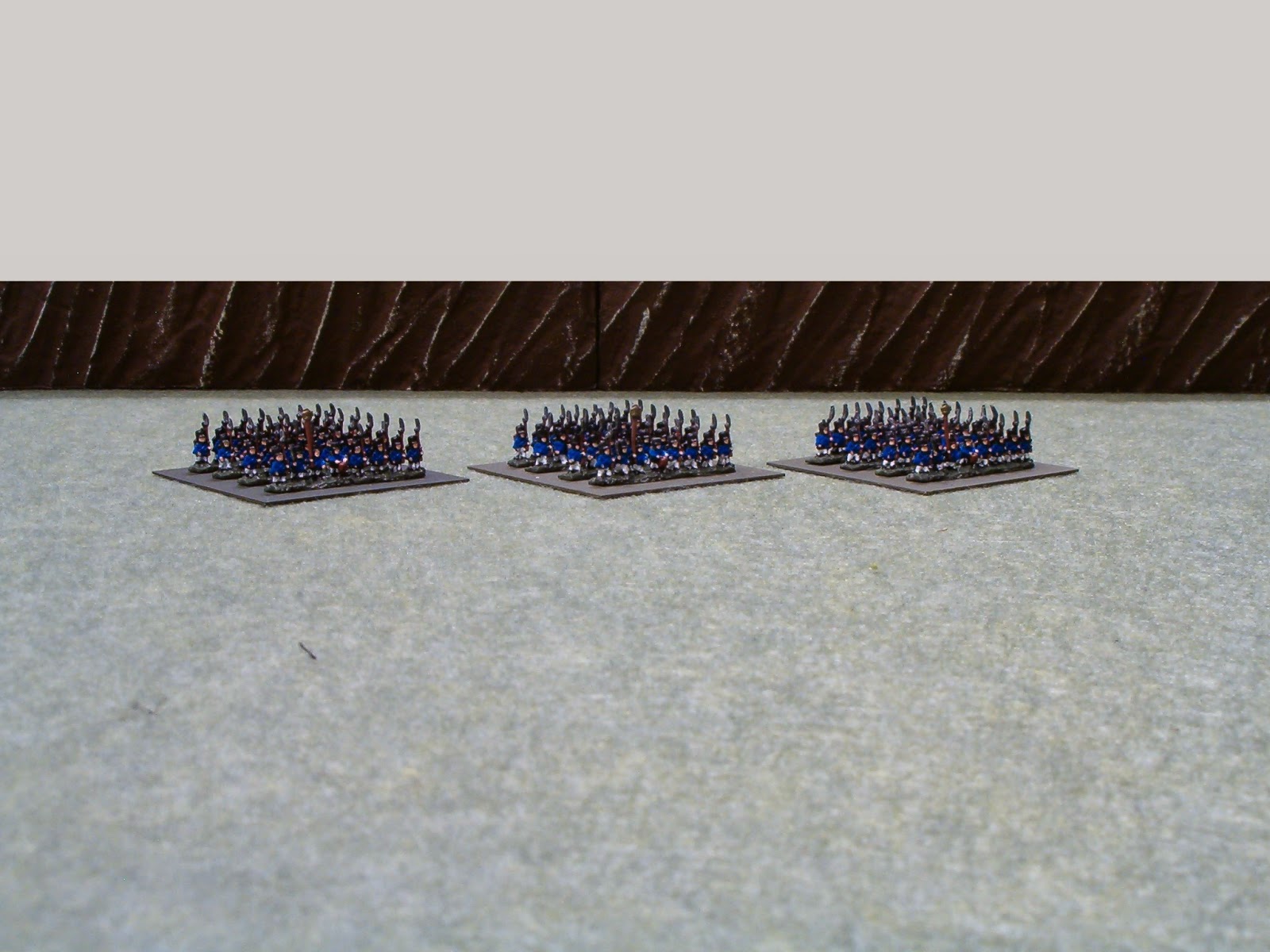 Still need to properly base and flock them, and add flags.
Posted by Chris C. at 3:42 PM 2 comments:

One of the reasons I want to start painting 6mm is that I just don't have the time for larger figures and everyone who has tried 6mm seems to assert they are much faster than larger scales.

Some years ago, I decided I wanted to try a Napoleonic skirmish game in 54mm. I painted this fellow, the first of what was supposed to be a "squad" of French light infantry:

This mini took me about four hours to paint – not including priming, overcoating, basing and flocking – and he ended up being the only 54mm Napoleonic model I ever completed.

Smaller size minis – for example, my 28mm fantasy figures – take me about two hours each to paint.

In starting my 6mm Napoleonic project, I chose to time how long it took to paint my first unit of 32 French line infantry, for comparison. I used a very basic paint job, since at a normal viewing distance of one to two feet or so, it is impossible to see much, if any, detail (though more on this below). 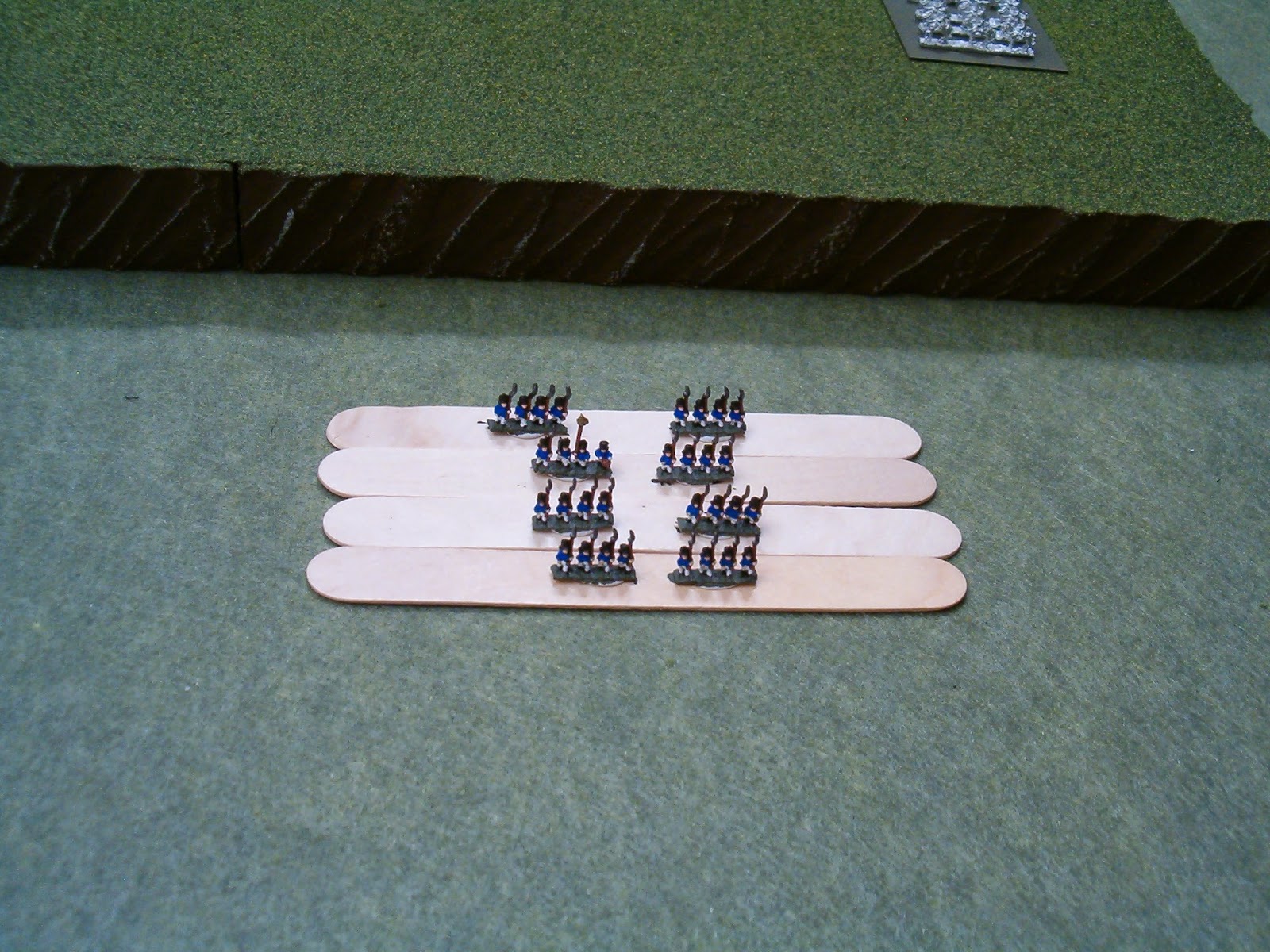 I adopted the painting process from Neil Thomas' One-Hour Wargames which seems ideal for such small minis:


"When painting begins, an assembly line process can be adopted. Let us assume that the budding wargamer has acquired some British Napoleonic infantry of the Waterloo campaign, and has prepared 12 figures ready for painting by giving them a black undercoat. The next step is to paint all the jackets in red. Once the last figure has had its jacket painted, the first miniature should be dry enough to paint the trousers in grey. This is followed by the hands and face (flesh or pink paint), and finally the base (green). The black undercoat can legitimately suffice for the other parts of the figure, covering muskets, shoes, backpack and headwear."

With such a basic paint scheme, these models don't look like much close up: 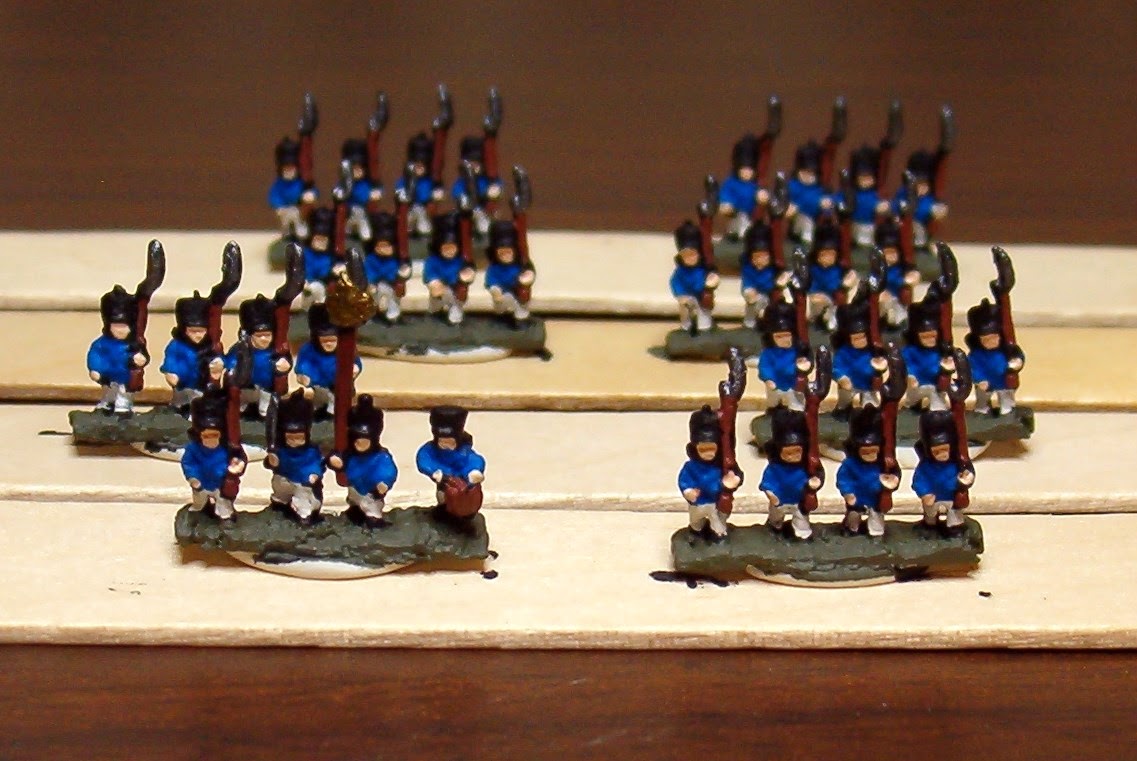 But from just one or two feet away, they look very much the part, I think: 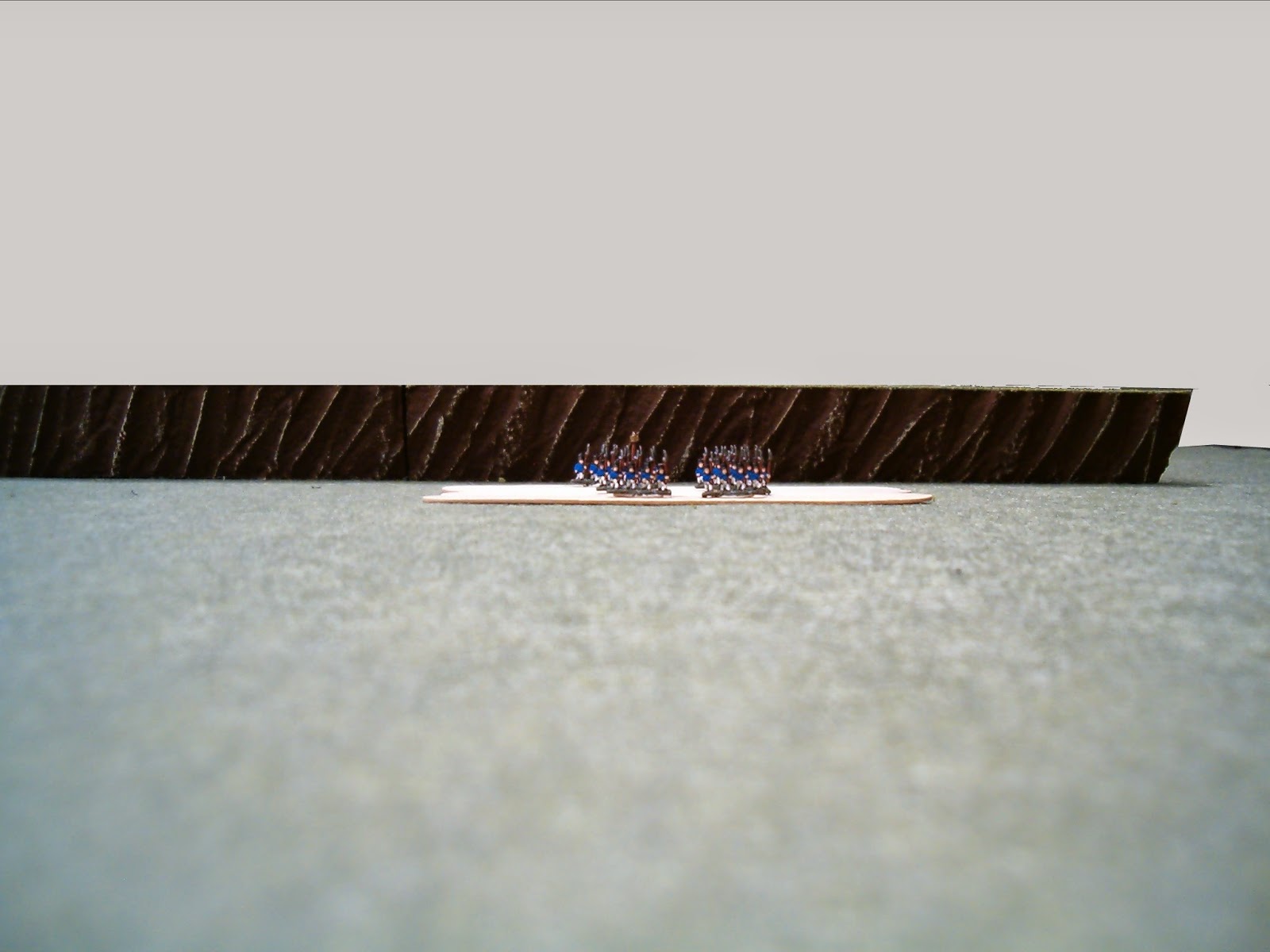 You may be wondering why I didn't paint the lapels and crossbelts white. Well, I did. Then I undid that (which added another 15 minutes to the painting time, but that won't happen again, so it doesn't count). Painting the lapels and crossbelts created a very bizarre effect. The crossbelts and lapels looked right close up on each individual man, but from a distance they looked completely wrong. The whole mass just looked like a white blob, with the white thoroughly dominating and washing out the blue of the tunics such that there was no blue visible at all from a distance. So I went back over the crossbelts and lapels with blue and decided to leave them that way. Now they don't look quite right as individual men, but the mass as a whole looks better to me, and that's the effect I want.

Jumping Back In With 6mm Napoleonics

After a two-year hiatus from painting (for which I mostly blame professional issues) I ordered two army sets of Baccus 6mm Napoleonics – one French, one Austrian – which arrived in the mail yesterday. I plan to use these with Neil Thomas' One-Hour Wargames Rules (1HW). 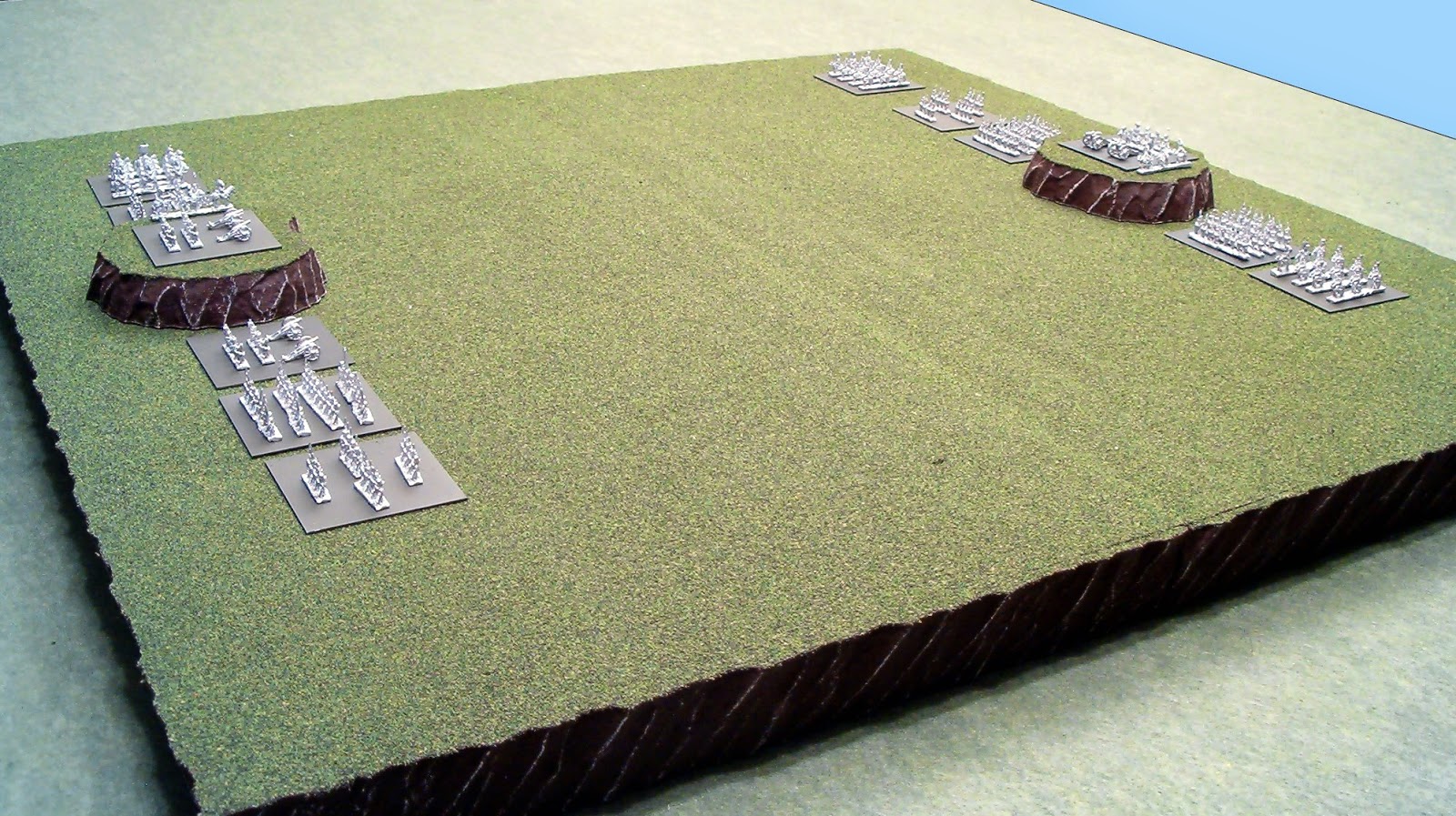 Opposing French and Austrians in 6mm on a 2' x 2' battlefield.

Armies in 1HW consist of 6 units, though with variable composition a complete "army set" for any given nationality requires 10 units. For the horse and musket era, this comes out to:

In practice an army will have on the table 3-4 units of line infantry plus 2-3 units of other types for a total of 6 units in a game. 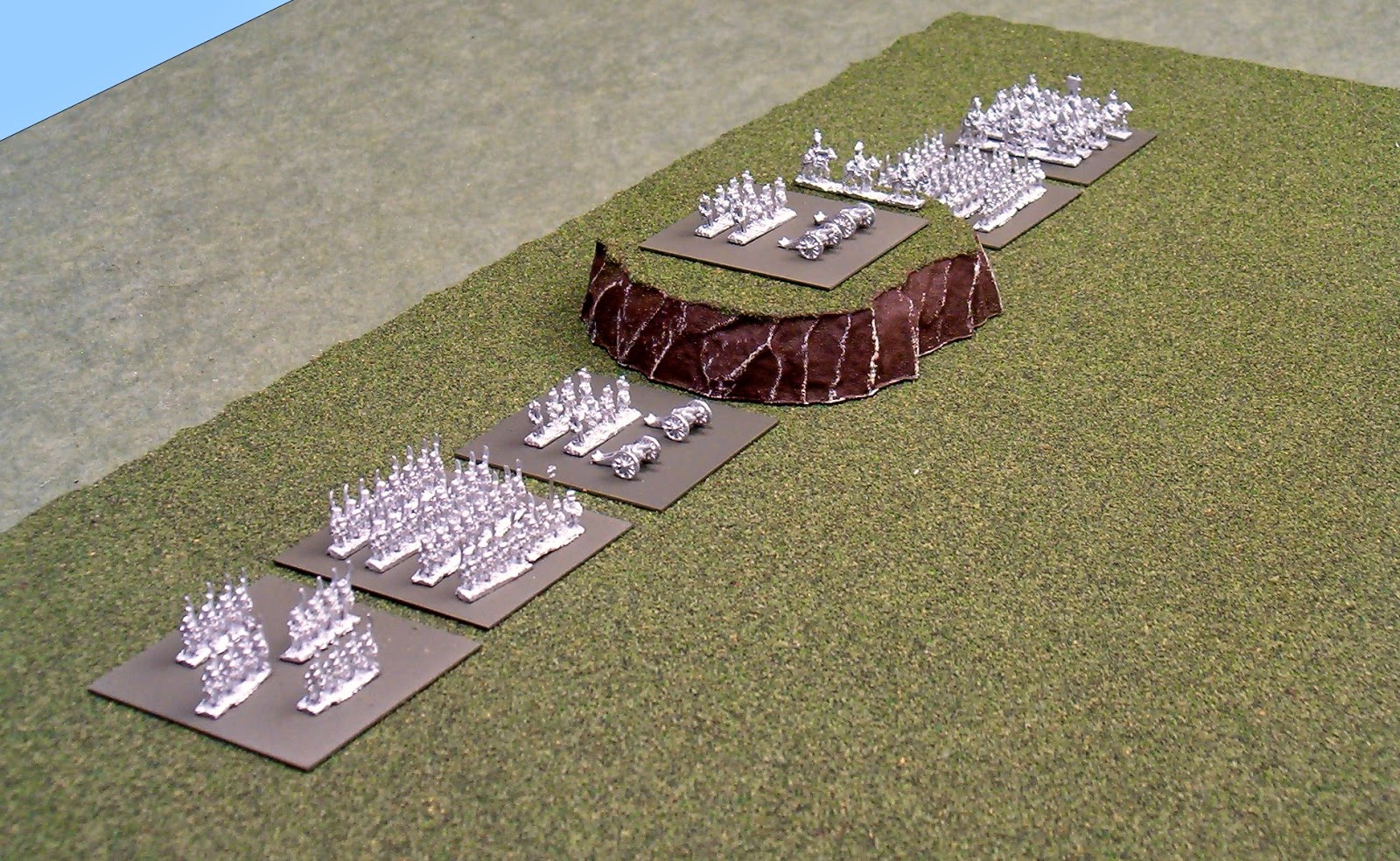 Normally played with 15-25mm models in units with a frontage of 4-6 inches each on a 3' x 3' battlefield, I'm going a bit smaller, using 6mm models on a 2' x 2' battlefield (and of course all movement rates and weapon ranges cut to 2/3). 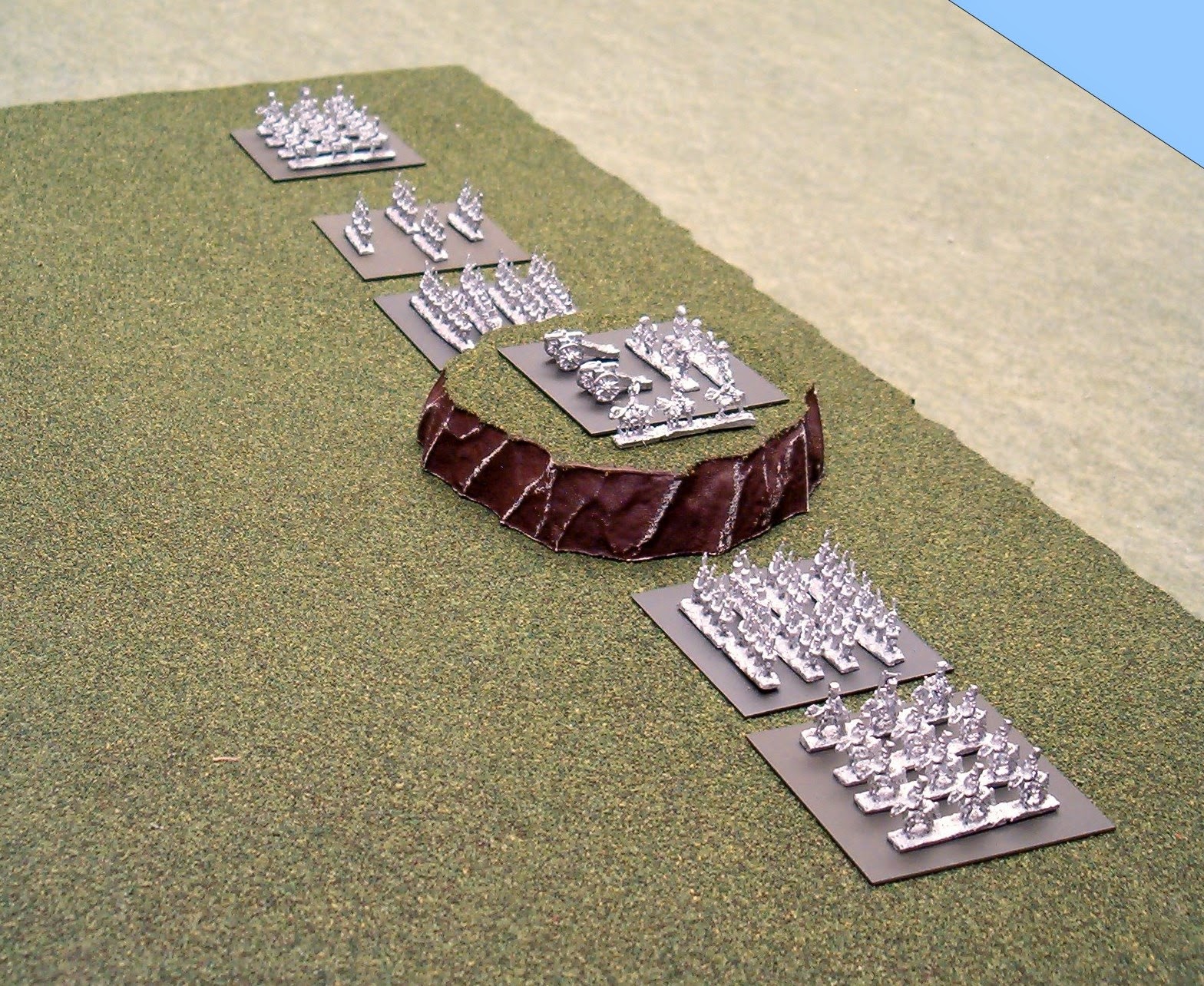 I have a ton of bases on hand and I worked out my basing last night by experimenting with different configurations. What I liked best were 2" square bases (i.e. a 2" frontage) with the following numbers of models in each one-base unit. 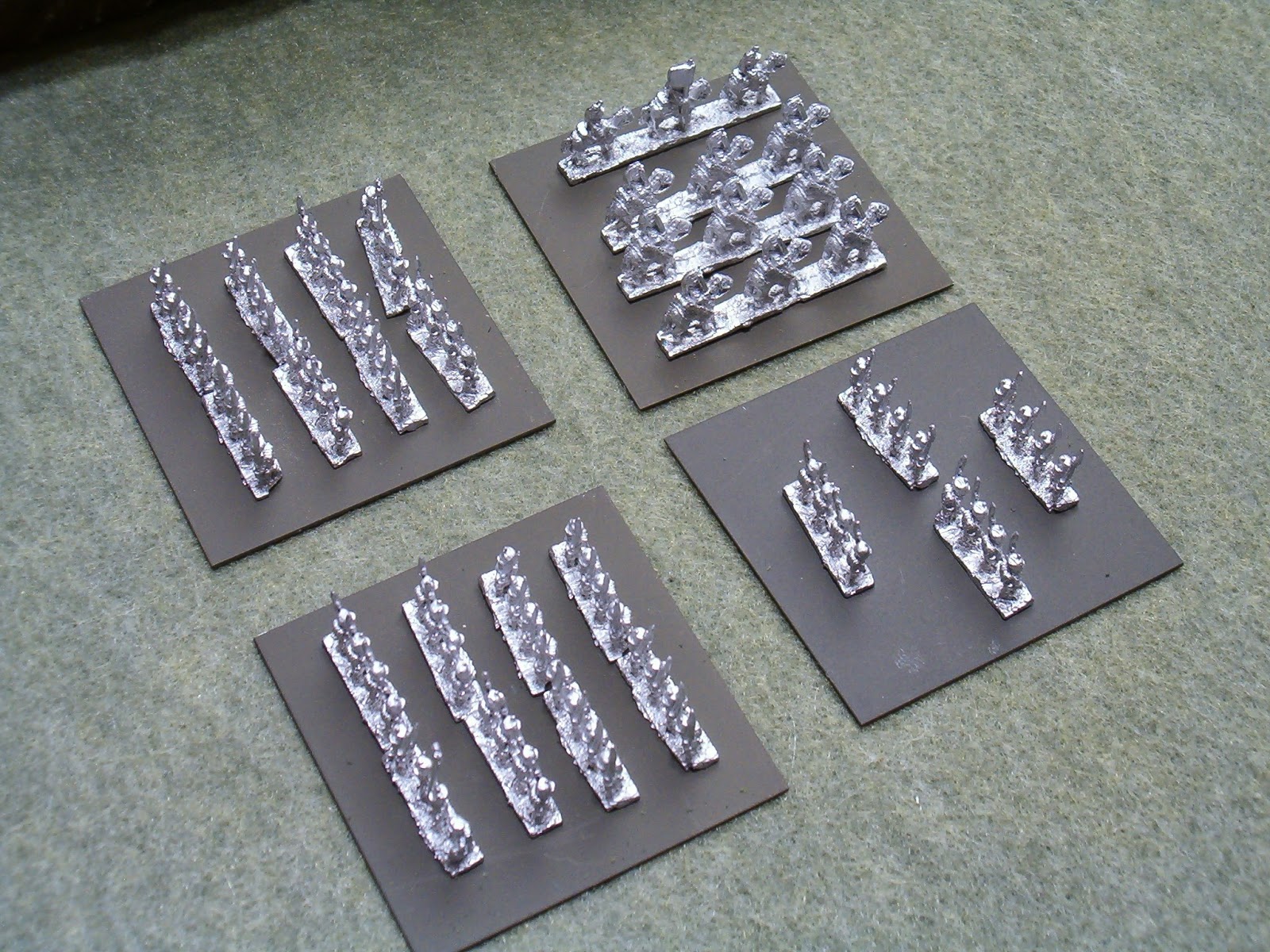 A close-up of line infantry, light infantry and cavalry.

Today I hope to get all the models stuck on to tongue depressors with blu-tack and primed in black. Painting "the unit not the man" will be a new experience for me. Everyone seems to assert that painting 6mm models is faster and easier than painting larger minis. I'll find out for myself in the next couple weeks.

Neil Thomas' book One-Hour Wargames hits the mark for its intended purpose and audience: "Practical Tabletop Battles for those with Limited Time and Space." The rules are for games with four to six units per side, fought on a three-foot-by-three-foot square battlefield.  With the demands of my job and very limited hobby time, this book has inspired me to jump back into miniature wargaming after a rather long two-year hiatus. 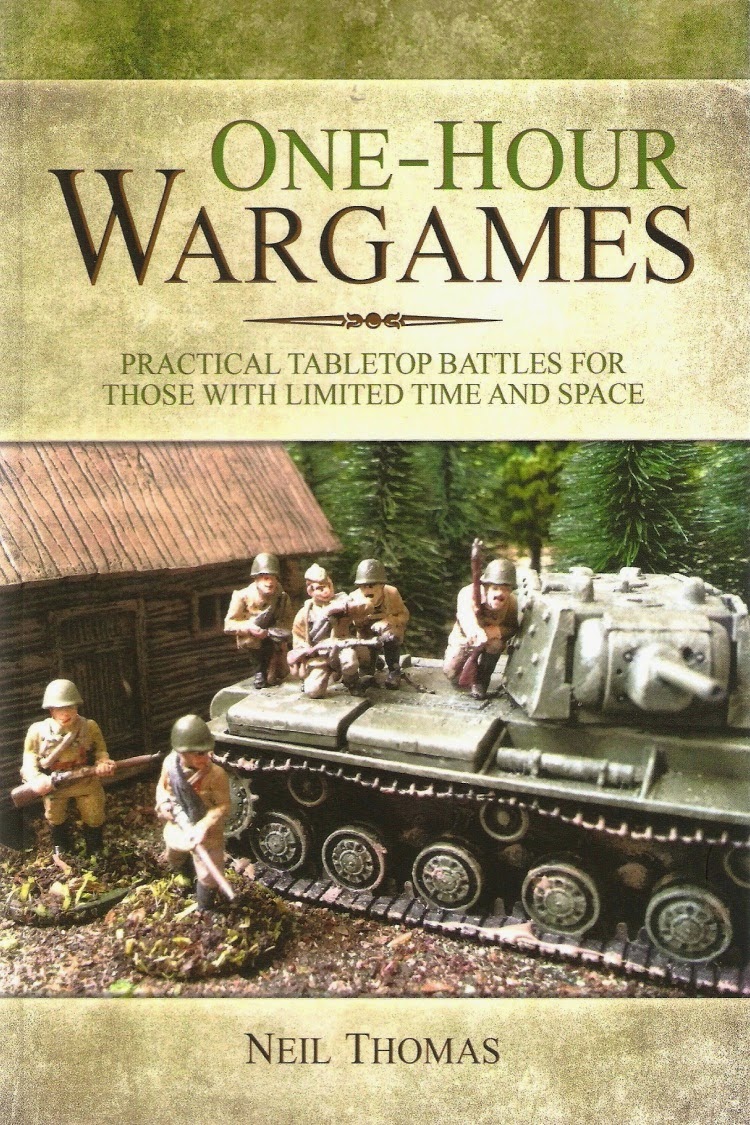 The book's main features include:


I recommend book to you if you are:

Email ThisBlogThis!Share to TwitterShare to FacebookShare to Pinterest
Labels: Rules

"When this legion had been reduced to a handful, when nothing was left of their flag but a rag, when their guns, the bullets all gone, were no longer anything but clubs, when the heap of corpses was larger than the group of survivors, there reigned among the conquerors, around those men dying so sublimely, a sort of sacred terror, and the English artillery, taking breath, became silent. This furnished a sort of respite. These combatants had around them something in the nature of a swarm of spectres, silhouettes of men on horseback, the black profiles of cannon, the white sky viewed through wheels and gun-carriages, the colossal death's-head, which the heroes saw constantly through the smoke, in the depths of the battle, advanced upon them and gazed at them. Through the shades of twilight they could hear the pieces being loaded; the matches all lighted, like the eyes of tigers at night, formed a circle round their heads; all the lintstocks of the English batteries approached the cannons, and then, with emotion, holding the supreme moment suspended above these men, an English general, Colville according to some, Maitland according to others, shouted to them, "Surrender, brave Frenchmen!" Cambronne replied, "Merde!"

The Clash of Spear on Shield